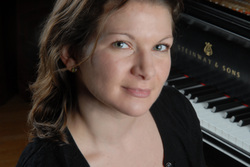 Described as “impressive and expressive” (Fanfare Magazine) and “superb...[with] great dexterity, rhythm, and touch” (American Record Guide), Hannah Creviston is Clinical Associate Professor of Piano Pedagogy, Director of the Music Prep Program and Coordinator of Class Piano at Arizona State University. She received her B.Mus. in Piano Performance and Music Education with a Piano Pedagogy concentration from the Crane School of Music at SUNY Potsdam, studying with Eugenia Tsarov. A researcher and presenter on the effects of music on children with autism, she holds an M.M. in Piano Performance and an M.MuED in Early Childhood/Elementary Music Education from the University of South Carolina where she studied piano with Dr. Scott Price. Prior to joining the faculty at ASU in Fall 2012, Creviston was on the faculty at the Crane School of Music.

She performs regularly in a duo with her husband, saxophonist Christopher Creviston. Together, they have recorded Phoenix Risingon the Blue Griffin label, SnellSessionsand Columbia Sessions,both on the Albany Records label, and Sunday Afternoon and Breaking, available through CD Baby. Their recordings have been described as “engrossing” (Fanfare Magazine), “highly imaginative and expressive” (composer Denis Bédard), “a good blend of the standard and the new” (American Record Guide), and “sensitive, transparent, powerful music making that causes one to hold their breath often” (Donald Sinta).